Applause for the Meta-Four 2013 Team! 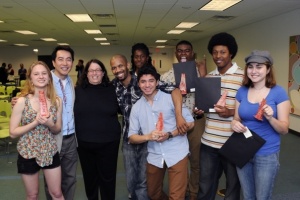 Houston, we have a team!

After competing at Space City Slam in a series of six poetry competitions, six young poets were chosen to represent WITS’s performance poetry team, Meta- Four, and the city of Houston at the international youth poetry slam festival and competition, Brave New Voices, in Chicago, August 7-11.

The six students who made the Meta-Four Houston 2013 team.

Thanks to the support of United Airlines, who generously donated round trip tickets, Meta- Four will be flying all the way to Chicago free of charge! Also a special thanks to the City of Houston through the Houston Arts Alliance and Travelers Insurance for their continuous support of Meta-Four and the Space City Grand Slam.

One Response to “Applause for the Meta-Four 2013 Team!”