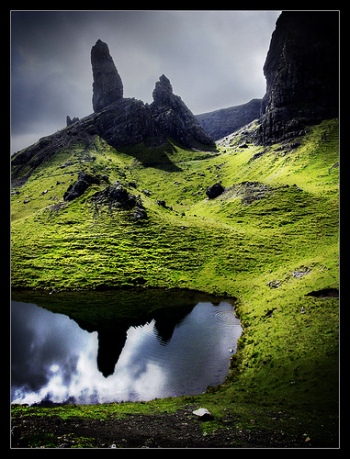 As a WITS writer, I try to help students realize that the knowledge and experiences they already have are the perfect fodder for their writing. Last week I noticed that the third graders were completing a unit on earth science. To help students review what they learned about landforms, I came up with a new lesson.

What would it feel like to be a canyon, a mesa, a desert, or a mountain?

I split the class into groups of three or four and assigned each group a different geography. In groups, students brainstormed a list of ideas about their land form. Each group presented their ideas; the audience gave positive feedback and also suggested ideas that could be added to the list. After defining personification, I had the students help me write a class poem on a land form that no groups were assigned.

Now it was time for students to write individually. Each one wrote a poem that personified their chosen formation.

If I Were a Mountain

I am a mountain,

I start as a low piece of land.

Then when an earthquake or lava

Comes out of earth,

When these things happen.

I can see through the sky.

I see through space.

posted by Amy Lin, Writers in the Schools

2 Responses to “Climb Every Mountain”