Writers in the Schools (WITS) understands the power of slam poets, and we are lucky to have on staff a WITS writer, Deborah D.E.E.P. Wiggins, who’s been ranked the #2 female performance poet in the world.

We also celebrate deaf poets–each year WITS students from T.H. Rogers School bring down the house at the Blooms reading at Discovery Green.

So, we are excited to announce the upcoming film Deaf Jam, which documents a convergence of these two worlds.  It follows the story of  Aneta Brodski, a deaf teenager living in New York City, as she prepares to be among the first deaf competitors in a National Poetry Slam. 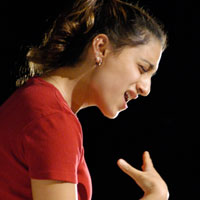 What: Deaf Jam, by Judy Lieff