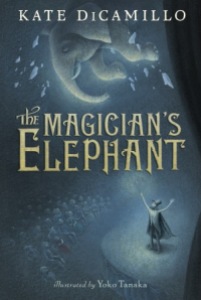 Straight from the Inprint press release:

The Cool Brains! Inprint Readings for Young People presents award-winning children’s writer Kate DiCamillo on Sunday, October 18,  2009, at Pershing Middle School’s auditorium (3838 Blue Bonnet at Stella Link) at 3 p.m.  Admission is free and open to the public. DiCamillo will read from and talk about her work, including her just-released new novel The Magician’s Elephant. That will be followed by a book sale and signing, providing audience members a chance to visit with the author. For more information, click here.

The Magician’s Elephant, aimed for elementary school children, tells the story of an orphan boy who asks a traveling fortuneteller whether his sister still lives and how he might find her. The man’s strange answer — it involves an elephant ­– sets in motion curious and wonderful events. “This book, these characters, undid me, just opened up my heart in a totally new way,” DiCamillo says. She hopes that when readers finish it “they will be more inclined to hope and believe in the impossible.”

This new fable, illustrated by Yoko Tanaka, is DiCamillo’s fifth novel (she’s also written several picture books for younger children).  She made a roaring debut in 2000 with Because of Winn-Dixie, which became a runaway bestseller and earned a Newbery Honor. Her third novel, The Tale of Despereaux, about a tiny mouse driven by love to perform heroic deeds, won the Newbery Medal and inspired a well-received animated movie.

DiCamillo was born in Philadelphia, raised in Florida, and now lives in Minneapolis. She describes herself as short and loud, and says she hates to cook but loves to eat. She’s single and childless but has lots of friends and is aunt to “three lovely children (Luke, Roxanne, and Max) and one not so lovely dog (Henry).” She faithfully writers two pages a day, five days a week. She likes to quote E.B. White, who once said, “All that I hope to say in books, all that I ever hope to say, is that I love the world.” Says Kate: “And that’s the way I feel too.”