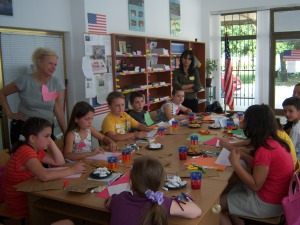 Today is the third day of the Creative Writing Camp in Tetova, and it is going very well indeed. As you may have gathered, we are using the same curriculum for each four-day program, although tweaking is necessary, both to incorporate lesson learns and to adjust to the new group at each site.

The students began their screenplays after they finished their Ekphrasis work. On the first day, they selected an image of a cultural object, a place of worship, cultural center, one of the Sar mountains, the ski resort near here, painted mosque, the Tetova Theatre, the city center, or many other images. Then this morning they began their poems about the images. They did a wonderful job. Then we wrote the plays in small groups which turned the American Corners into a bit of a wild place. It was at that point that the television cameras came to film the children, and they are very excited about being on the local TV this evening. Tomorrow is the last day, with performances of their plays and presentation of awards.

Yesterday, after the afternoon group left at 3 pm, some colleagues and I traveled into the countryside to visit with the new Baba in the mountains. He was so wise.  He is a leader of the Sufis in this region of the Balkans, and we talked about the long history of Sufi poetry from the medieval period onward. He read me a wonderful poem by Naim Frasheri called “The Words of the Candle” which begins like this:
Here among you have I risen,
And aflame am I now blazing,
Just a bit of light to give you,
That I change your night to daytime,
I’ll combust and I will wither,
Be consumed and be extinguished,
Just to give you brightness, vision,
That you notice one another,
For you and I will fade and tarnish,
Of me there will be no remnant,
I will burn, in tears lamenting.
That is just one sample of the poetry of Naim Frasheri, who wrote in French, Persian, Albanian, Turkish and other languages and has been translated, must interestingly perhaps by Robert Elsie. Now I am off to the kale, the  Ottoman Empire fortifications on the mountains.
I love the word Baba. It means so many different things. Baba denotes parent in so many different ways. It means father in Albanian. It means grandmother is Slavic languages and Greek. It suggests both great love and great respect. So with Baba Mundi, Babaimplies all of the above. I am sending photographs of Baba Mundi so that you can actually see him at his tekke with his only dervish.
More Anon, from the Balkans, Merrilee Cunningham

No Responses to “Meeting the Great Poet”