Sanda Cisneros to Read in Houston 4/1/09

This Wednesday, April 1, Sandra Cisneros will be reading from The House on Mango Street, which (like WITS) celebrates its 25th anniversary this year. The reading will begin at 7:00 p.m. in Shell Auditorium, located in McNair Hall at Rice University, followed by a book signing at Rice’s Student Center. WITS writers have found The House on Mango Street an excellent resource from which to build writing activities, especially for young Hispanic students.It continues to be one of the most popular books in our library.

Sandra Cisneros is an American novelist, short-story writer, essayist and poet. She is one of the first Latino writers to achieve commercial success. Cisneros received her Bachelor of Arts from Loyola University in 1976 and a Master of Fine Arts from the University of Iowa Writers’ Workshop in 1978. Currently, she is Writer-in-Residence at Our Lady of the Lake University in San Antonio. In addition to writing, Cisneros is the president and founder of the Macondo Foundation, an association focused on advancing creativity and honoring the community of writers who are socially engaged. Cisneros also did a Public Service Announcement for WITS as part of the I Wish I’d Written That series. Visit our website to hear her read a poem by a WITS student. 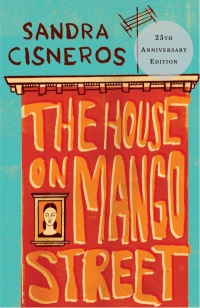 25 years ago Sandra Cisnero’s novel A House on Mango Street helped change the cultural landscape of America by providing a voice for a demographic that would soon become one of the largest segments of American society. Told in a series of stunning vignettes, The House on Mango Street is a coming-of-age classic about a young girl growing up in the Latino section of Chicago. The novel, first published in 1984, won the Before Columbus Foundation’s American Book Award in 1985, and has become required reading in middle schools, high schools, and universities across the country. It has sold over two million copies since its initial publication and is still selling strongly. 2009 marks the 25th anniversary of the publication of The House on Mango Street in the United States, and Cisneros will be traveling to 20 cities to celebrate with her readers.

This event, presented by Nuestra Palabra: Latino Writers Having Their Say, is funded by The Texas Commission on the Arts and The City of Houston, through the Houston Arts Alliance. Partners include KPFT 90.1 FM, Rice University, ALAS-HCC, Inprint, Univisión Television, NHPO, and Barnes & Noble Bookstore.