Where Are We Now: Mignette Dorsey 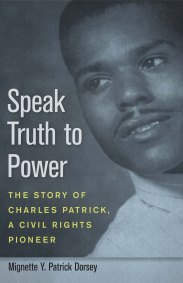 WITS Writer Mignette Dorsey will discuss and sign her newly released book, Speak Truth to Power: The Story of Charles Patrick, A Civil Rights Pioneer, this Saturday, September 18,  3 PM at The African American Library at the Gregory School, 1300 Victor Street.  The story is based on Dorsey’s father, Charles Patrick, a civil rights leader from Alabama whose case against a white police officer propelled his fight for social justice in the fifties.  This event is free and open to the public.

About the Book – Speak Truth to Power: The Story of Charles Patrick, a Civil Rights Pioneer

The story of black WWII veteran Charles Patrick begins in Birmingham, Alabama, December 1954. An argument with a white woman over a parking space leads to a savage beating administered by her police officer husband and two other cops. After agonizing soul searching, Patrick accuses the officers of assault before a racist judge and then waits for justice—or death. Expecting his own demise, Patrick instructs his brother to support his family, but is shocked when the officers are abruptly fired. He is even more stunned when they are rehired to the dismay of Birmingham’s white and black citizenry, the white-owned press and politicians.

With white citizens writing fiery letters in support of Patrick, black citizens rallying at the historic Sixteenth Street Baptist Church, coupled with a barrage of well-placed front-page news stories, Patrick’s persistent quest for justice with one white and later two black attorneys pays off. Two of the officers are fired, followed by an F.B.I. investigation and federal indictment of the trio. The case also prompts policy changes to the Birmingham police force and city commission, while laying an early foundation for the Civil Rights Movement that ensued later. Speak Truth to Power offers a rare look into the workings of the 1954 press, the city polity and unheralded civil rights attorneys — before Rosa Parks’ brave stand. Most unusual, however, is that it unveils racial unity as early as 1954.  – University of Alabama Press

Born and raised in Los Angeles, California, Mignette Y. Patrick Dorsey is the youngest child of Charles and Rutha Patrick. She is a journalist and writer, former city of Houston spokesperson,  and former journalism teacher. Currently, she is adjunct professor at Lone Star College-CyFair  and an active member of the Houston Association of Black Journalists. Dorsey is completing a screenplay based on her father’s story. For more information, click here.