I hear the sounds of gangs fighting like red fire,
lobster and shrimp being cooked on orange, warm grills.
People being served at tables with happiness,
the loud sound of barking dogs that turn black,
sounds of footsteps walking through the night with sadness,
loneliness roams in the air,
gleaming light from the moon that the blind can see though the streets of Alabama.
The wind blows to make people fear the eye.
As the storm comes, people close their windows and doors to get away in fear.
As the winds pass, the city calms
so the midnight moon can pass once again. 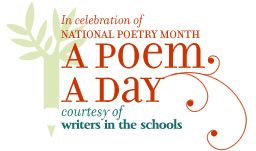 This poem is featured as part of the 2011 A Poem A Day campaign, a National Poetry Month celebration by WITS that features a different poem by a WITS student every day during April. Click on the logo to learn more.