Studies show that children are more likely to be creative in a non-evaluative atmosphere where ideas and exploration are emphasized.  Classrooms with a “right answer fixation” significantly deter original responses.

As children get older, the pressure to conform, to make the “right” response, increases.  The percentage of original responses in ideational fluency (idea generation about a specific topic) drops from about 50% among four-year-olds to 25% during elementary school (Treffinger 1984).

Sir Ken Robinson, an author and creativity expert, tells the story of some 4-year-olds in a Nativity play with his son James.  The three kings, played by young boys, approached Mary, Joseph, and the baby Jesus bearing their gifts of frankincense, gold, and myrrh.  The first child said, “I bring you gold.”  The second child said, “I bring you myrrh.”  The third child piped up, “Frank sent this.”  Robinson suggests that young children who are not worried about making mistakes are able to make all kinds of unexpected and creative “sense” of the world around them.

So, take time to hang out with some 4-year-olds in a relaxing environment.  Their creativity will rub off!

by Marcia Chamberlain, Writers in the Schools 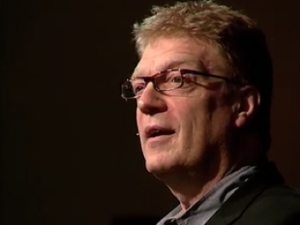 Sir Ken Robinson is an author, speaker and international advisor on education and the arts.  He argues that our current schools are killing the creativity in our children, and he explains why an entire overhaul of the education system is necessary.

This week the Texas Senate will continue debating the controversial bill that will cut public school financing. There are many things at stake in this bill, including major reductions to the arts programs.

As we confront a threat to the arts in the face of state-wide spending cuts, Robinson makes a crucial argument for why creativity matters as much as literacy. Check out this video of Robinson’s TED talk on YouTube.